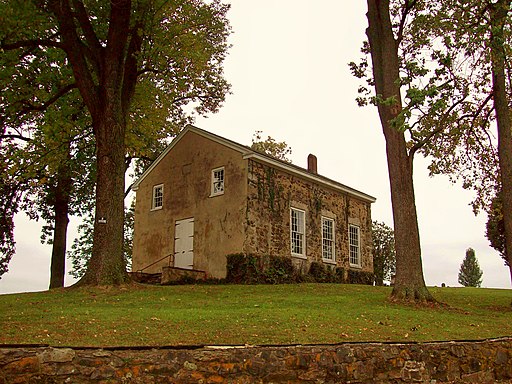 Watters’ Meeting House was built around 1773 and services were held for almost 200 years.

(Wikipedia) On October 16, 1751, Henry Watters was born near the present site of the church. After being converted to the Methodist faith at the Presbury meeting in 1771, he came back to his home to start a church. He was known as being one of the first American “itinerate” preachers. Around the same time, a log structure was built on the site. It was known as the “Watters Meeting House”, but unfortunately the structure was destroyed by a fire years later. The current structure, made of stone, was erected around 1840 on the very spot that the previous log building once stood. It served the Methodist church for many years. The church grew and later became the home of Daniel Ruff, a circuit rider of the Methodist Episcopal Church. According to records at the Lovely Lane Methodist Museum in Baltimore, Maryland, the Church was part of the Darlington Methodist Charge, which included Darlington United Methodist Church and Rock Run United Methodist Church. Records from the Lovely Lane Museum also show that the church celebrated its 150th anniversary in August 1932. It was shared with the other churches in the celebrations, which lasted for… continued

Save on activities, spas, restaurants, and events near you at Groupon